My first cast...hopefully also the last 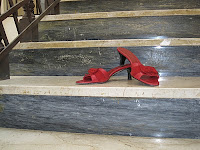 Po the Kungfu Panda and I have a common enemy. STAIRS. In the past six months had 2 accidents with stairs, well of course I couldn't denominate the role of high heel sandals :p. The last one was a terrible, almost a near death experience as I recalled. I fell off the stairs from a two-meter height.

Since I'm not as fluffy as Po, I got broken wrist bones and sprained both wrists muscles, also internal fracture in the knee and wrist and a ripped eyebrow. Quite terrifying indeed. However, I'm still thankful that I wasn't dead, that my injury was only on my wrist and hand, and it was the left side. Also thankful that my brain wasn't really affected. Alhamdulillah and sujud syukur.

Due to that accident, I got a cast on my left hand stretching from the palm to the elbow and a plastic surgery aka stitches on my forehead. The doctor gave an order of about 4 weeks in the cast. Incidentally, I have already booked my vacation to Jakarta on the fortnight. So, I asked for a referal or somekind of letter to explain my condition to doctor in Indonesia. When I arrived in Jakarta, my mom took me to a famous orthopedist. He also once took care of a relative. A well recommended doctor, I'd say.

His clinic was very nice. The long queue of patients showed that he might live up to his reputation. After a long wait, I got called in, just when my mom went out looking for a snack. I went inside and the doctor with his friendly tone, ask me to sit and address me with  'Mam (Ibu) before asking what's my complaint. I told him I fell from the stairs and broke my wrist and gave him the doctor's letter and xray CD from the hospital in Jeddah. After reading that I came from Jeddah, suddenly he switched his tone, from a friendly tone to a degrading one and addressing me as KAMU (tous instead of vous in French) and not IBU anymore. SNAP just like that. Of course, I could hear and feel the change. He then waited for a while to see the CD in his screen,  and asked few question about the fall. Then my mom entered the room. And just like that his tone of voice also changed when he saw one of his old patient. Back to the nice tone when I entered the room. I got a feeling that he might think that I was an expatriate maid (TKW) from Saudi.

So, afterward he ordered an Xray to see my current condition. From there he said that I might need an operation to put a kind of plate to correct my broken wrist. Then he sent me to the lab for preparation of operation tomorrow morning. But then we asked to the doctor about the operation and the costs. We could only talked to his assistant. She said that the operation would cost around 20 million rupiah. Say what???  And it was an estimation. I said I have to asked my insurer about this. She was quite agitated and asked whether I wanted to be operated or not. So I said, no until I got approval from the insurer. 20 million rups...geee.... I knew the cost might be high, still I need to discuss things through first. Luckily, I didn't go there just like that on the morning after.

While waiting for the insurance approval (which finally took about a week), I went for culinary vacation to Solo and to visit some families there. Fortunately, my grandauntie's family whose house was  my resting place, was mostly consisted of doctors! 4 general doctors and 1 pulmonologist! They said based on the latest Xray, my bone was actually already fixed. They suggested me to go to another famous orthopedist there in Solo. Solo was renowned for it's orthopedic hospital and rehabilitation center. And this doctor was the son of the late doctor establishing the hospital.

So I went to his house where he had his private practice and the line was very full, I got queuing number for the next day. The next day, the line was long. But one oddities I spotted, the patient who didn't take any medication just left the building without going back to the reception table. So I thought probably they had paid him inside his room. When we went inside, another patient were still in the room, and we waited in the back of the room.

Dr. Tunjung was a friendly guy. He looked at my latest xray from the clinic in Jakarta, and then me and told me to come tomorrow to the hospital where he would open the cast. I was surprised. And asked,' but doctor, the doctor putting the cast said 4 weeks'. He jokingly answered, so you don't want to the cast to be removed? I asked if it was already better. He said, he would see it tomorrow. And after making an appointment, we just left his room. Also without paying any fee! But the vitamin of course wasn't free :). However, this is the first time in Indonesia I went to a doctor and left without having to pay doctor's fee. Of course that doesn't include a doctor's visit to most of my family who are doctors. I also once got waived from an Indonesian dentist service back when I was a student in Rotterdam. He said I didn't have to pay anything, because I was a student though I also said I had insurance coverage. Yet he still refused to get paid.

The cast opening in the next day was a very fast process, but quite frightening. They used a kind of special chainsaw that didn't cut through skin. But I still could feel the heat emitted from it to my skin. The sound was terrifying. It was like those horror movies where the saw cut through bone. Then my wrist was having x-ray once more. The doctor said  that my broken bone was already conjoined. This kind of breakage usually took only about 2 weeks in the cast. I couldn't feel things in  my arms down from the elbow. Dr. Tunjung then only prescribed me some medications and some physiotherapy sessions.

The first physiotherapy sessions was reminding me of the pain during delivery. I thought nothing could be worse pfuuuh. I had several sessions in Solo and then because it wasn't better yet, I got some more in Jeddah, when I got back here during the umroh Ramadhan. But up until I wrote this note, I still could not fully utilize my left wrist. My masseuse was quite good in massaging my muscle or tendon which looked like to get pinched and stuck between the bone, or something like that. I think I still need to get an orthopedist check up. Up until now, I still can't move it freely and is still painful sometime

Anyway, I also met a two different kinds of doctors in Indonesia. One has more appetite for money than helping people. I mean, if he really wanted to help cure people, he already knew from his x ray photo that my wrist was already better. The cast could be taken off earlier. Yet he wanted to perform an operation immediately. Operations cost a lot, and I was annoyed by just remembering it.

While the other doctor was a doctor with philanthropic sides, reminding me of my granduncle who up to now still do pro bono works by giving free consultation to the unfortunate in between his busy schedule. Dr. Tunjung patients came from faraway places, like Jeddah (;p). I heard places like Bali, Mojokerto (East Java), Cirebon (west Java), Tegal was called out. He also built a masjid in a suburb of Solo called Tawangmangu, my childhood touristic getaway.

I prayed that the accident I had is a way from Allah to cleanse my sins. Insya Allah.