Hajj Journey with the Locals

November 23, 2011
When people talking about hajj, I was reminded by the times I took the journey. The spiritual journey makes me longing so much to do it again. But the physical part is so exhausting, and I think it's better to give my place to other brother and sister who has never perform the hajj before. My post this time is about the physical part of the journey with the local operator.

My first hajj was with local operator who is Indonesian, and the group was also consisted of Indonesian. My second one was with the real local people, meaning that it was operated by Saudi hajj operator, and the participants were local Saudis from different regions. Apparently, it was quite a large operator. I came to know this group because my teacher was one of the guide.

Compared to the first one, my second one was so smoothly organized. From the transportation from Jeddah to Mina and back to Jeddah, to the accommodation for the 5 days of my stay, they were all set neatly. We were picked up in Jeddah, and dropped in front of our tent door. On the way back, we were picked up again in front of our tent and dropped for a while in Makkah to perform Thawaf Wada, before continuing the journey back to Jeddah.

We have 2 big tents (maktab) instead of 1, one for ladies the other for men, with two separate doors. From my mom's story, I learnt that the Indonesian hajj group has only 1 maktab for each travel operator and the maktab door is for both men and women. So the division between men and women was inside. Each person got a chair bed that can be folded during the day. The tent was equipped with AC, of course. Some of the people who were our bus mates, were nice to us, although their English was limited, still they were trying to make some conversations, but some people thought that we were somebody else's maid and treated us quite "differently".

Also in Arafah field the tent was fully separated, with two different tents, unlike the Indonesian hajj tent, where only big cloth were used inside the tent to divide the men and women (according to mom's experience). It was comfy not to have stranger men around though, since after arriving in Arafah very early just before Fajr prayer, I still needed to continue sleeping. And the organizer accommodated that need by providing a set of sleeping bag for each person. Nice touch. The tent was also equipped with those removable toilet. So, I, the small bladder girl, didn't have to get out of the tent premises and roamed in Arafah to find a public toilet which based on past experience, was very crowded and sometimes far. It was put beside the tent side door, but still inside the high zinc fence, definitely convenient. And when the high noon came, when it was time for the Arafat day to start, the participants didn't have to go outside the tent, we just sit outside but still in its premises. 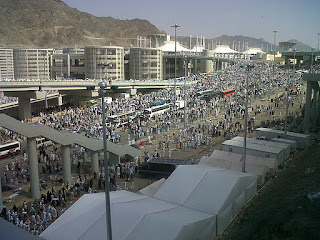 After the Arafah day, we went back to our maktab, and since it was in the Muzdalifah area already, we didn't have to go out of our tent to perform the ritual of Staying in Muzdalifah (mabit in Muzdalifah). And because the shaf (row) of our tent from Mina wasn't broken, then we were still eligible to stay in the tent during the 3 nights of Staying in Mina (mabit in Mina) ritual. Back to the Maktab in the morning, people were lining up in the toilet/bathroom to get some shower. What a long line for a quick unscented shower! Yes, we were still in the state of Ihram, so we were not allowed to use scented stuffs (including soap, lotion, toothpaste, clothes, anything...) before performing first Tahallul (the ritual of releasing the Ihram state by cutting small part of our hair or shaving the head for men).

Since this is Saudi operator, the meal time was also Saudi style. My stomach was already growling since 8am, looking for its breakfast. Turned out the timing was very different. My ideal timing meal is 3 times in one day, which are: breakfast 8-10am; lunch between 12-2pm, dinner between 6-8pm. But there, they served Fajr snack, just after fajr prayer, then big breakfast starting at 10am, then lunch 3-4pm, and dinner.....around 10 or 11pm!!! Just when I was already in bed, they wake me up just to have dinner. ..My poor tummy :). And the portion they gave, Masya Allah. When the four of us came back from jumrah stoning, we were given a plate of kabsah rice which enough to feed 8 people! Yet, it was nice that they provided all you can drink beverages and yogurt in a big fridge like they have in supermarket. Very important to have liquid in the desert heat :)

Our maktab was very far from the Jumrah, itwas in the Muzdalifah section. While the Hajj plus from Indonesia was quite close. However, our package included...an unlimited trip with the newly built metro for the 5 hajj days. Yaay! The ticket was in a form of wristband. So we just show the doorman our wristband.
The metro which was intended for hajj season only, was very new, it was still clean and shiny :p. The station even looked not completed yet with lots of unused cement scrap and stone everywhere. And of course don't forget the queuing. With so many people performing hajj, queuing is one of the hardship that we can't avoid. The metro itself was only intended for travelers from the Gulf countries' operators. So many people thought that the metro wasn't up and running yet. And that it went back and forth only for test drives ;).


The jumrah stoning site is now 5-story high, and the metro station is on the same level with the fourth and fifth stores. So, after stepping out of the metro, we walked about 1 km from the station, on to the bridge in to the fifth floor of the jumrah site. After the Aqabah stoning, we just went waaaay down and heading to Masjidil Haram to perform Thawaf Ifada, one of Hajj Rukun. And the days after that, after stoning of the three jumrah, we just went back to the metro station and to our tent.

While the Indonesian group usually were going together in groups, guided by their teachers, quite unfortunate for us, that we didn't get such privilege of going together with a guide like them. Before performing the Aqabah stoning and Thawaf Ifada, after the day of Arafah, in the morning, my teacher as the guide gave small lecture in the tent about how to perform the hajj as a reminder. And on the day after that, after some small lectures, usually in the morning and afternoon, she made some small quizzes about hajj. Yeaaah...prizes for winners hehehe...But after that we were on our own. So that was why we were given the metro ticket...

Well, of course the whole hajj journey was quite exhausting. As one of my teacher said, it is mostly a ritual for the body. So we have to prepare our body for this journey. I took multivitamins and took a power walk for a week before coming, preparing my feet for the long walk. Those walk brought down my sneakers who had served me for 8 years. My dear shoes were rest in pieces. But in overall, I was satisfied with the service given by this operator, neatly organized.

Lastly, I am just praying, that all our ibadah are accepted by Allah ta'alla. Taqabalallahu minna wa minkum, brothers and sisters.